Notes of a Long-Suffering Fan 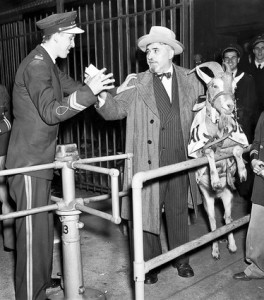 Excuse me for wanting to shout this from the rooftops the way that radio announcer Russ Hodges did after the Giants’ Bobby Thomson hit the Shot Heard Around the World against the Dodgers in the 1951 Miracle at Coogan’s Bluff game. But I just can’t help myself.

I have been a Mets fan since my mother took me to a game against those same Giants and Willie Mays at the Polo Grounds in 1962. It was a confused crowd watching the newly-minted expansion Metsies team versus the deserter Giants. They were divided in loyalty, unsure what to do when the great Mays came to the plate against the bumbling home team. Should they boo or cheer? I was too young to understand the nuances. I took it on faith that Mays was a hero, but the Mets were New York and I was New York and for a 7-year-old that was enough. My heart was with the home team.

My young fandom was rewarded seven years later in 1969 when the Amazin’s, as Casey Stengel called them, gave us faithful the gift/curse of a miracle far greater than Thomson’s home run–namely the least likely World Series victory in baseball history. Led by Tom Seaver and Jerry Koosman, along with a ragtag collection of castoffs and unlikely heroes–Donn Clendenon, Al Weis, Tommy Agee, Ron Swoboda, Ed Charles among them–that team was forever imprinted into my heart and memory. That team, that year, was like the first kiss from the first girl I ever loved–magical and enslaving. Nothing from that point forward would ever measure up. And nothing–no matter how bad–would ever stop me from continuing to love my mongrel Metropolitans.

Four years later, in 1973, they made it back to the World Series but lost in seven games to the great Oakland A’s team of Reggie Jackson, Sal Bando, Campy Campaneris, Vida Blue, Catfish Hunter and Blue Moon Odom. It would then be another 13 years before the Mets would make it back to the World Series and win again in 1986. And then it would be 14 years more before another trip to the Fall Classic, a dream subway series that resulted in a nightmare loss to the hated Yankees. Now, here it is 15 years since then, 15 years of pain. There was the wrenching Carlos Beltran bat-on-shoulder loss to the Cardinals in the NL playoffs of 2006, the historic (and not in a good way) collapses in ’07 and ’08–and then just a decline into badness, aided and abetted by the Madoff-compromised owners better known as the Wilponzi’s.

For the past five years, there have been promises and more promises, a rebuild on the cheap. And then this. Beautiful, exquisite, sublime this. A giddy I-can’t-believe-this-is-actually-happening kind of feeling that Yankee fans will never know. It is why I have never envied the Yankees nor wanted a team that was less complicated to love. How dreary it must be to feel that winning World Championships is your due. We Met fans suffer, we suffer long and hard, but how wonderful when all that suffering is rewarded. Yankee fans will never experience our kind of giddy joy.

This series against the Cubs, though, pitting us against a team and its fans whose suffering is epic to the point of sorrow–well, my heart goes out, a little bit. The Cubs had not been in the World Series since 1945, had not won one since before the First World War. There is no one alive now who remembers or was witness to the last Cubs World Championship. The Cubs have curses on top of curses: the Billy Goat, the black cat from ’69, Steve Bartman and the foul ball. The bad juju hanging over them makes you think the Chicago Fire was the Devil’s warmup. Even so, there were reasons before and during the series for Mets fans to be fearful. There was the Back to the Future prophecy from the Michael J. Fox movie, in which, given a glimpse into the future, movie audiences learn that the Cubs finally win the World Series in 2015. And here they were! Poised to do just that in 2015. So even though we were up three games to none, I couldn’t help think about another bad moon franchise, the Red Sox, who had their own lengthy drought and curse to overcome, and how they battled back from a 3-0 deficit against the Yankees in 2004, going on to win the World Series and end the Curse of the Bambino. Who was their GM that year? None other than Theo Epstein, who was now the GM of the Cubs. So I was a little worried, concerned that our thorough domination of the Cubs through the first three games was just a prelude to a fall bigger than my poor heart could sustain.

But in the end the Curse of the Billy Goat proved more powerful than whatever bad angels might plague the Mets. For those who don’t know the story, in 1945 Billy Sianis, the owner of the Billy Goat Tavern, adopted a baby goat, and started taking it to Wrigley Field to watch the Cubs. He paid for a ticket for the goat every time. When the Cubs made the 1945 World Series, Sianis brought the goat to the game, but the Cubs big-timed him and told him that he could not bring the goat into Wrigley Field. Sianis then invoked a powerful Greek curse on the Cubs, swearing that they would never again make it to the World Series. The name of Sianis’ goat, believe it or not, was Murphy. Is it too much of a stretch, for a fan of a star-crossed team, to believe that Murphy the goat was somehow reincarnated into Mets second baseman Daniel Murphy, who, with a career total of only 62 home runs, went on the greatest postseason home-run hitting spree of all time and almost singlehandedly prevented the Cubs from getting to the World Series?

Sorry Cubs fans. I feel your pain. I know your pain (well not quite).  I’m just too busy feeling good right to feel that bad.

Peter Alson is a writer and editor. Among his published books are the memoirs Confessions of an Ivy League Bookie and Take Me to the River. He's also co-authored (with Nolan Dalla) One of a Kind, a biography of poker champion Stuey Ungar, and Atlas, the autobiography of boxing trainer and commentator Teddy Atlas. His articles have appeared in many national magazines, including Esquire, Playboy and The New York Times. He has worked as a writer for People magazine, and as an editor for Playboy and for Hachette Publications. He has written screenplays for Paramount and various independent producers, and his TV pilot, Nicky’s Game, starring John Ventimiglia and Burt Young, appeared in the New York Television Festival and the Vail Film Festival. As a poker player he has finished in the money numerous times in the World Series of Poker and other events. He lives in New York with his wife, Alice, and their daughter, Eden.
View all posts by Peter Alson →
This entry was posted in Uncategorized. Bookmark the permalink.

2 Responses to Notes of a Long-Suffering Fan