In 1961, Gay Talese flew out to California on Esquire’s dime to write a story about Frank Sinatra. Talese’s editor Harold Hayes assured Talese that strings had been pulled and he would have exclusive access to the notoriously private Sinatra (who at that moment was particularly wary of the media because of rumors and innuendo about his supposed Mafia ties).

But when Talese called Sinatra’s press agent from his hotel the morning after his arrival to arrange a meeting, he was informed that “Frank isn’t feeling very well, he has a cold” and the meeting was not going to happen.

Talese, who frankly admits he wasn’t that keen on doing the story anyway, called Hayes and told him that he might as well return to New York. But Hayes told him to stay and wait it out. So Talese waited–for 31 days–and while he was waiting began talking to everyone he could in Sinatra’s world: the woman who carried Sinatra’s bag of toupees, the valet who cooked dinner for him on his rare nights home, the bartender at his favorite watering hole, anyone and everyone.

At the end of the month, Talese returned to New York and turned in a 15,000 word piece on the man he had never actually been able to talk to, and Esquire published it in its entirety. Using the techniques of fiction–getting inside Sinatra’s head, making use of interior monologue–Talese crafted a portrait of Sinatra that was deeper and more revealing than anything anyone had ever written about the man before. It was a groundbreaking piece, in that it read less like a celebrity profile and more like a short story, and was really one of the first examples of what was to become known as New Journalism. Here is just a taste of it:

Sinatra had been working in a film that he now disliked, could not wait to finish; he was tired of all the publicity attached to his dating the twenty-year-old Mia Farrow, who was not in sight tonight; he was angry that a CBS television documentary of his life, to be shown in two weeks, was reportedly prying into his privacy, even speculating on his possible friendship with Mafia leaders; he was worried about his starring role in an hour-long NBC show entitled Sinatra — A Man and His Music, which would require that he sing eighteen songs with a voice that at this particular moment, just a few nights before the taping was to begin, was weak and sore and uncertain. Sinatra was ill. He was the victim of an ailment so common that most people would consider it trivial. But when it gets to Sinatra it can plunge him into a state of anguish, deep depression, panic, even rage. Frank Sinatra had a cold.

“Frank Sinatra Has a Cold” has just been republished in book form by Taschen in a lavish and gorgeous slipcased Collector’s Edition limited to 5,000 signed copies. The coffee-table sized book is beautifully illustrated with photographs by Phil Stern along with tipped-in facsimiles of Talese’s famous shirtboard outlines–the multicolored felt-tip penned diagrams and schematics by which Talese plotted out his writing plan of attack. 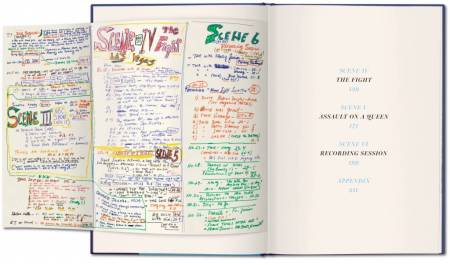 The release of the book was timed to coincide with what would have been Sinatra’s 100th birthday, and last night at the Gagosian Gallery on the Upper Eastside, Talese sat down before an audience of about 60 people to mark the occasion and talk about the story with my cousin John Buffalo Mailer.

John Buffalo had interviewed Talese on a previous occasion at the private club Omar’s, and though he came prepared with a long list of questions then, he only got to ask the first one, because Talese, renowned storyteller that he is, started talking and didn’t stop until 45 minutes had passed and they were out of time. This time, once again, John Buffalo came with his prepared list, but wisely prefaced his opening remarks by saying that he hoped that they might have time for him to ask a second question (in fact, he was able to ask a second question after Talese only went 40 minutes on the first!)

I have known Talese for many years now, having been first introduced to him by my uncle, and though he never talks down to anyone or assumes any airs, I still feel myself somewhat in awe of him. I certainly felt privileged to attend the event and to once again have a chance to talk to him. In addition to being a remarkable writer, he is gracious and charming, and above all elegant, and even before I knew him,  I counted myself as an admirer of his writing. Perhaps no piece of journalism was more important to me in my own development as a journalist and writer than his Frank Sinatra piece. In fact, the first piece I ever wrote for Esquire, which, due to him, my uncle, and a few others, represented for me the pinnacle of magazine publishing, posed a challenge for me not unlike the one he faced with Sinatra. At least that’s what I thought as I tried to pin down the elusive poker champion Johnny Chan (Chan is Bluffing, Esquire, May, 1989 http://www.seiyuu.com/okamoto/poker/misc/chan.htm).

Now, I won’t be so brash as to actually compare my piece to Gay’s, but I will tell you that without him, I probably wouldn’t have been able to write or get my Chan piece published. Gay showed me the way, and for that and many other things I would like to thank him here publicly, as I was able to thank him privately and in person last night.

And do yourself a favor. If you’ve never read “Frank Sinatra Has a Cold,” seek it out, find it, read it. You can thank me later.

Peter Alson is a writer and editor. Among his published books are the memoirs Confessions of an Ivy League Bookie and Take Me to the River. He's also co-authored (with Nolan Dalla) One of a Kind, a biography of poker champion Stuey Ungar, and Atlas, the autobiography of boxing trainer and commentator Teddy Atlas. His articles have appeared in many national magazines, including Esquire, Playboy and The New York Times. He has worked as a writer for People magazine, and as an editor for Playboy and for Hachette Publications. He has written screenplays for Paramount and various independent producers, and his TV pilot, Nicky’s Game, starring John Ventimiglia and Burt Young, appeared in the New York Television Festival and the Vail Film Festival. As a poker player he has finished in the money numerous times in the World Series of Poker and other events. He lives in New York with his wife, Alice, and their daughter, Eden.

One reply on “Honor Thy Mentor”