The first is that when I was a kid I watched the famous Harvard-Yale 29-29 tie, a game that Harvard trailed by 16 points with two minutes to go. It was a miracle comeback so unlikely that it inspired me to believe that a similar miracle would enable me to be admitted to Harvard when I applied. It was a miracle so unlikely that the Harvard Crimson immortalized it the next day with the headline Harvard Beats Yale 29-29!

The second thing is that when I became a bookie in an ignominious period of my life that was actually a prelude to a glorious period, I was reminded incessantly by my fellow lawbreakers that I had in fact attended the aforementioned hallowed educational institution, and that it was not known for spawning low level criminals. In fact, just to drive the point home, they took to calling me Harvard.

I mention these two things because the Jets -Patriots game this afternoon, a must-win game for the hometown Jets if they wanted to stay alive in the playoff hunt, pitted Jets QB Ryan Fitzpatrick against putative GOAT, Tom Brady. As I think almost everyone knows, Fitzpatrick is a Harvard man. There are about as many Harvard guys in the NFL as there are Harvard guys working in bookmaking offices. Let us say that Fitzpatrick, the only Harvard grad to ever play QB in the NFL, shares with me the distinction of being an anomaly.

Coming into the season, Fitzpatrick was signed to back up Geno Smith, a quarterback most Jets fans regarded with suspicion if not outright derision. Smith was on his way to becoming the starting QB when a funny thing happened during training camp: his teammate IK Enkampali broke his jaw because Geno wouldn’t pay him a few hundred bucks that IK felt he was owed (yes, as an ex-bookie, I recognize the impulse, though of course we never did that kind of thing). The quick take on the incident by most observers, journalists and even Smith’s teammates, was that in not handling the situation well, he showed a lack of leadership and, well, how not to put this indelicately, smarts. That was clearly not the case with his Harvard-educated competition, who compensated for his more average football talent with better judgment. So with Geno’s jaw wired shut, Fitzpatrick took over the reins. 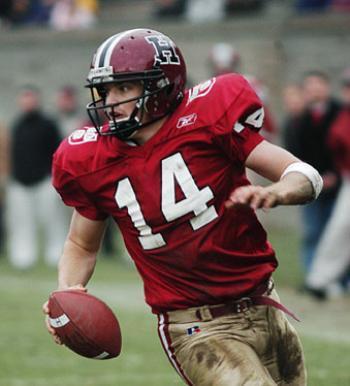 Despite his journeyman credentials, Fitzpatrick came into today’s contest on the verge of setting every single season record for a Jets QB, besting Broadway Joe, Vinny Testaverde, Ken O’Brien and Chad Pennington. As a lifelong Jets fan and brother Harvardian, I was pretty psyched. I was also realistic about our chances. This was Brady we were up against.  Belichick. The hated Patriots.

The truth is, this has been an odd season. I was thrilled to be rid of Rex Ryan, who, though he still has some apologists, has over the past few years shown himself to be a pretty terrible head coach. Bowles, a first-time head coach, got the Jets off to a good start this season. They seemed disciplined and methodical. Refreshingly so after years of sloppy play and stupid penalties. Until they started to play badly that is. Then they began to seem not just bad but boring, and I started to fear they were a reflection of their coach, who came across as almost too low-key in contrast to the bombastic Ryan. Then, unexpectedly, after ten weeks of mediocrity, they hit another gear, led by Fitzpatrick and his two stud receivers, Marshall and Decker. The defense jelled. I began to think they might actually make the playoffs for the first time in five years.

Still. There was Brady, standing in the way. I’ve seen too many games and seasons that Brady has ruined for the Jets. So even when the Jets were up 17-3 midway through the third quarter of today’s game, I was apprehensive. Sure enough, the Pats got a field goal to make it 17-6, and then, in what looked like one of those plays that a season turns on, Fitz had the ball knocked out of his hand as he was about to pass, and the Patriots ran the fumble in for a touchdown. The Jets added a field goal to make the score 20-13, but that play left a bad all-too-familiar taste in my mouth. When Brady took over with five minutes to play, you knew what was going to happen. He made it extra excruciating by twice converting 4th down passes that had me veritably screaming at the television. He tied it with a TD pass with two minutes left.

It didn’t matter that Fitz almost pulled it out with a long bomb on third down that would have won the game. It didn’t matter because Quincy Enunwa couldn’t hold on, and when the game went into OT, I was certain we were cooked. I’d seen this movie before. Too many times.

At the start of overtime, however, something happened that I’ve never ever seen before in the NFL. Certainly something I’ve never seen from a Belichick team. The Patriots won the toss and the Patriot player charged with electing to kick or receive, inexplicably opted to kick. It was a brain fart of a weird and high magnitude. The kind of thing that would have happened to Geno Smith if he had been the one making the decision. The kind of thing that always seems to happen to the Jets. Except now. Except now when they’re led by Mr. Fitzmagic, my brother alum.

Fitzy wasted little time taking advantage of the Patriots’ boner. Bing bing bing, he passed them right down the field, the key throw going to the guy who had dropped the pass at the end of regulation, Enunwa. On first and goal from the 6-yard line, Fitzpatrick didn’t dither around. Decisive, Brady-like, unafraid, he went right to Decker in the corner of the end zone. Boom! Game ovah!

Now it’s on to Buffalo and Fat Rex. If the Jets beat their ex-coach next week, they’ll be back in the playoffs after the 4-12 disaster he authored last year. No matter what happens, we’ve got a QB now. He ain’t Brady, but he ain’t too bad. And he bleeds green and crimson.

Peter Alson is a writer and editor. Among his published books are the memoirs Confessions of an Ivy League Bookie and Take Me to the River. He's also co-authored (with Nolan Dalla) One of a Kind, a biography of poker champion Stuey Ungar, and Atlas, the autobiography of boxing trainer and commentator Teddy Atlas. His articles have appeared in many national magazines, including Esquire, Playboy and The New York Times. He has worked as a writer for People magazine, and as an editor for Playboy and for Hachette Publications. He has written screenplays for Paramount and various independent producers, and his TV pilot, Nicky’s Game, starring John Ventimiglia and Burt Young, appeared in the New York Television Festival and the Vail Film Festival. As a poker player he has finished in the money numerous times in the World Series of Poker and other events. He lives in New York with his wife, Alice, and their daughter, Eden.
View all posts by Peter Alson →
This entry was posted in Uncategorized. Bookmark the permalink.